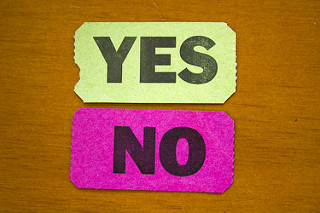 As I’ve said, we have a nine-year-old daughter. We also have a three-year-old dog. The word “no” is not uncommon in our house. Sometimes I say it too quickly without thinking, which may require me to admit that I made a mistake and change a “no” to my daughter, to a “yes” because, well, I was wrong. My wife and I are pretty good at comparing notes about what we’ve said “no” or “yes” to to our daughter, and our daughter has mostly learned that. 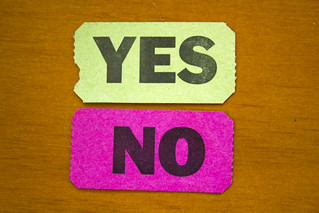 “No”, to my child can come pretty easy. “No” to others and “no” to myself doesn’t always come as easily. Outside of parenting, there are several reasons that I may find myself facing the possibility that I should really say “no”.

My Reputation For Getting Things Done
Because I have a reputation for getting things done, I get asked to do a lot of things. I, like everyone else, has a limited amount of time and physical and mental energy. I can’t say “yes” to everything, which means that I really need to work on saying “no” when it’s necessary. I don’t always do that. In some situations, I can’t, but in most I can and just don’t because I 1) don’t want to let others down and 2) don’t want to damage my “gets shit done” reputation. If I don’t say “no” to somethings, however, I inevitably will blow up my “gets shit done” reputation by not being able to meet all of my commitments.

I Follow the New and Shiny
I have trouble saying “no” to new and interesting opportunities. If something sounds like I would enjoy being involved, or if it might lead to opportunities later in which I might want to be involved, then I may have trouble saying “no”. If something sounds fun (or tasty), even it takes me away from commitments I’ve made to myself, I often have the same problem, which will eventually lead me away from what I really want in life.

The Solution
So, how do I do better? In the past few months, I have been much better about saying “no” when it came to things that took me away from my fitness goals. Using a macro-nutrient app has helped me keep a clear picture of how much activity I do, what and how much I consume, and my weight trend. I see all of this in relation to my weight, calorie, and activity goals on a daily basis. This has led me to drop about 20 pounds in the past six months and feel really great.

I also refer to my “manifesto” on a daily basis. This is my guide for the person I want to be and the life I want to lead. Since I wrote this a few months ago I’ve used it to help me prioritize both small and big opportunities that arise. If I compare the opportunity to my manifesto I can see how that opportunity fits with that very high level vision that I have for my life. There are of course times that I have to say “yes” even when it doesn’t align with my manifesto (this is more likely to happen at work) because it just has to get done, but I’m less likely to follow the wrong shiny things and more likely to say “no” even if in the short-term it might tarnish my “gets shit done” reputation in exchange for protecting it in the long run.

Finally, I recently heard David Allen, the author of Getting Things Done, say on a podcast that having a system such as GTD, helps you to see when you are overcommitted, or on the verge of it. If you don’t have a clear picture of all of the projects and tasks that you are committed to, you can’t possibly know when you need to say “no” to other things that come in.

Having the right tools, whether that’s an app, a vision statement or manifesto, and an organizational system, help to provide that clear picture that guides me to when saying “yes” and when saying “no” will best serve me. Do you say “yes” too often? What about “no”. What could you be doing to get better at saying these at the right times?

On a final note, I won’t be posting again until probably the second week in January. I’ll be spending the time with family, reviewing my year, and planning the next twelve months. Please have a peaceful and healthy holiday season, regardless of whether you celebrate any of the many holidays that fall during the next few weeks or not. I’ll see you in 2018.