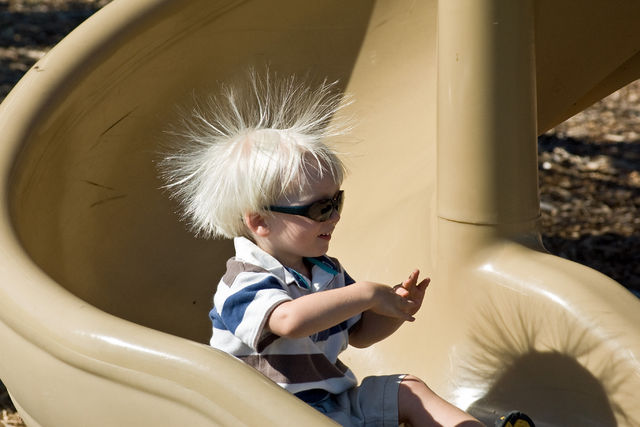 Yesterday I was leaving the spare bedroom that has become my home office and got a small shock when I turned off the light switch. As the weather gets cold and dry in Saskatchewan, static electricity because an annoyance, even without having carpeted floors. Sometimes it can be quite painful, but it’s a fact of life here.

Every year, when the static electricity returns, I’m reminded of when my daughter was a baby, sleeping in her crib. One night, after she had fallen asleep in my arms while we rocked in the rocker in her room, I gently placed her in her crib, careful not to wake her. I then pulled up her little blanket to cover her and literally saw sparks flying off of my child.

I heard the little pops of the static as the blanket rubbed across her sleeper, and in that dark room, saw several sparks. I was still a new and slightly paranoid mother so I stood there and just stared, waiting to see if anything else was going to happen. She didn’t even twitch. She just kept sleeping.

When I eventually left, I may have  come back a few minutes later to make sure there was no actual fire (new mom, not originally from Saskatchewan). I may have done that more than once. She continued to sleep, because that’s the kind of baby she was.

There’s no great wisdom in this post. I was just reminded of the time I was worried I’d accidentally electrocuted or set fire to my child by putting a blanket on her while she slept and thought I’d share it. She’s almost twelve now and doesn’t seem any worse for wear, but I’m sure someday, even though she was asleep when it happened, she’ll tell a therapist about that time her mother caused sparks to fly off her as a baby.

Featured image courtesy of Ken Bosma under a CC-BY license.