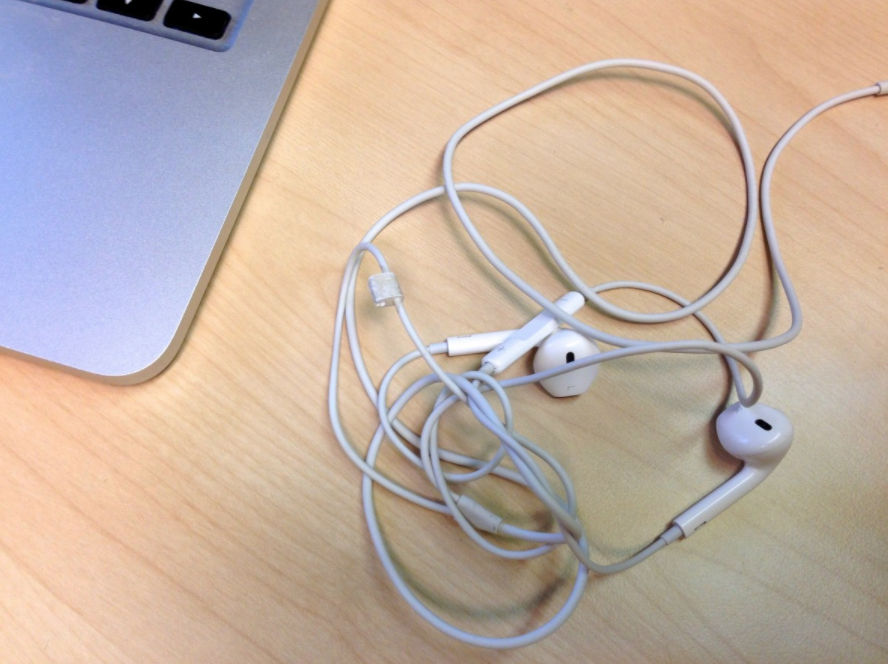 Several years ago, my friend Dean commented on Twitter something about the ridiculous amount of time the average person spends untangling earbuds. I was reminded of this the other day while untangling my earbuds. I have the ones that came with my iPhone and they have a little clip on them to hold them together and to, theoretically, keep them from tangling. I don’t use it, so I don’t know if it works.

I think most of us spend too much time doing something we really shouldn’t be spending that time on. These are the things that not only aren’t good for us and take the time we could be spending on more important things, but they’re also the things that don’t actually make us feel good either.

I’ve been doing a pretty crappy job lately when it comes to looking at my phone. I’ve been keeping it in the bedroom at night (not next to the bed) so that I can use it to meditate first thing in the morning. The problem is that when I get out of bed to get it, I end up looking at several apps before I meditate, which is both a time suck and generally doesn’t put me in a good head space to meditate.

This morning I did the same thing, but when I opened my Ten Percent app to meditate, I saw a session from Jess Morey call “Mindfulness While You’re Online,” which I felt would probably be appropriate for me. I’d already scrolled through the bad and really bad news on Twitter and just wanted to shut that out for at least a few minutes. A few seconds into the meditation, however, Morey told us to pick up our phones and  start scrolling through an app we use a lot and notice how we felt while using it. I went back to Twitter and frankly felt a bit queasy and was glad when she told us to put our phones down.

Charles Duhigg notes in his book The Power of Habit that most of what we do in life is automatic. That’s good when it comes to being able to walk, but mindless scrolling on social media, binge watching television shows, popping a handful of chocolate chips in our mouth, or other things we do without paying attention to how we feel during and after (and not just how we think we feel) is both bad for us and a colossal waste of time.

Watching one episode is probably relaxing and doesn’t take away from time you should be sleeping. Looking at social media for a set amount of time, consciously aware of how it makes us feel is fine, but picking up your phone several times per day and scrolling through for long periods of time, all the while your body getting tense from both your position and what you’re reading is sucking the life right out of you (I’m kind of pointing my finger at myself here).

It’s not just about the things we do in leisure time either. Think of how many meetings you’ve sat in when you didn’t really need to be there? How much time have you spent commuting to work (hopefully we’ll see a shift in this area for many people who clearly can work from home)?

The point is that we need to be paying better attention to where we’re spending our time. If we’re doing something that we don’t need to do and doesn’t make us feel good and is taking time away from something we do need to do or that makes us feel good (and is good for us), then why are we doing it?

The irony here, for me, is that I need to be more mindful of how I’m spending my time in the morning to make sure that I have time to meditate and become more mindful. Where are you spending time that isn’t serving you either in the short-term or long-term?