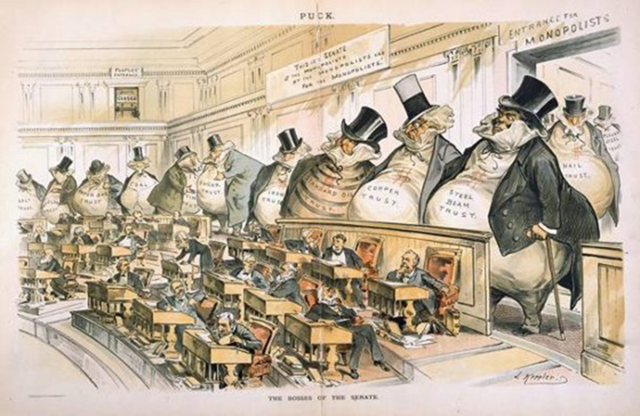 I’m currently reading a book called The Upswing: How America came together a century ago and how we can do it again. To summarize, the books takes readers through what is known as the American “Gilded Age”, which lasted for about thirty years in the late 1880s, and how the country came out of it stronger. There’s a new show on HBO about this time period called, appropriately, The Gilded Age.

During the Gilded Age (a term that was coined by Mark Twain and was not a compliment of the time) there was an enormous disparity between the wealthy and everyone else, anti-immigrant sentiment, racism and sexism were the norm, individualism was favoured over community, and there were a lot of voices predicting it was the end of the “American Experiment”. It wasn’t, of course, because the Progressive Era came next and turned around most of the problems, except racism and sexism.

In the book, the authors Robert Putnam and Shaylin Romney Garrett argue that America (and I would say Canada too) is in another Gilded Age, and that we can take the lessons learned from the time to address the problems we’re currently facing, but this time racism and sexism too.

As part of their case for us being in another Gilded Age, they explain something they’ve termed the “I – We – I Curve”. During the Gilded Age in the late 1800s the focus was heavily on the individual, but then the country swung to put more emphasis on community and the greater good so it was a time of “We”, but since the mid 1960s “We” has been turning back to “I”.

While reading the beginning of the book I was reminded of a concept I first read about in a book by the late Buddhist monk Thich Nhat Hanh. In his book The Mindfulness Survival Kit, he explains the Buddhist practice of Metta Meditation, or “loving-kindness meditation”. While Metta Meditation is specifically a Buddhist practice, the beliefs behind it are found across most faiths in the world.

After you’ve meditated to feel true love for yourself, you know you have the capacity to realize these aspirations because you’ve experienced them to a greater or lesser degree. Then you can do the same meditation on someone else, first of all a friend or a dear one, then someone you feel neutral about, and then someone you dislike, and then someone you love very much and to whom you may feel a strong attachment. If you’re successful you’ll develop equanimity and be able to love and understand even the person you formerly disliked. You may also the person you in a different light with more understanding and fewer wrong perceptions.

Whether or not we’re in another “Gilded Age” or not, it does seem to me at least that we are in an “I” period. Perhaps taking time to practice Metta Meditation or even silently wishing the stranger you pass on the street that they be well, could be a small step toward refocusing on the We and taking action to start guiding us into another post-Gilded Age period.

Featured image courtesy of Nashhinton under a CC-BY-SA license.