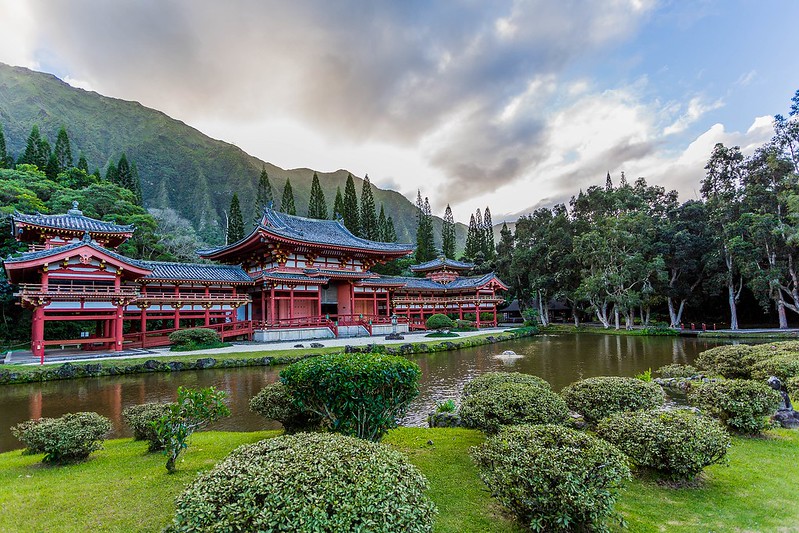 About 16 years ago, my now wife and I went to the island of O’ahu in Hawaii. We stayed in Waikiki, but one day we rented a car and drove to the North Shore. We didn’t go to the beach there, but rather stopped to visit the Byodo-In Temple in Kahaluu. It was incredibly peaceful experience, especially compared to the crowded and busy Waikiki.

“The Byodo-In Temple is located at the foot of the Ko-Olay Mountains in the Valley of the Temples Memorial Park. It was established on June 7, 1968, to commemorate the 100 year anniversary of the first Japanese immigrants to Hawaii. The Byodo-In Temple in O’ahu is a smaller-scale replica of the over 950-year-old Byodo-In Temple, a United Nations World Heritage Site in Unique, Japan.

The Byodo-In Temple is a non-practicing Buddhist temple which welcomes people of all faiths to worship, meditate or simply appreciate its beauty.”

When we were there we got some birdseed and put it in our hands. The birds would fly down and sit on the edges of our hands, eating. There were also koi in an elaborate pond. Several older women were seated at a table teaching people how to make paper flowers. To say it was peaceful, is an enormous understatement.

Either when we first got there or as we were leaving my wife took pictures of the Temple, one of which hangs in our home. Whenever I look at that picture I’m taken back to that peaceful afternoon. On particularly stressful days, I often wish that I could be walking the grounds of the Byodo-In Temple, feeding the birds and the koi, and watching the women making flowers. Since I can’t, I do what I can to recreate the feeling of peace within me. This might be through looking at that picture, meditating, writing, or sitting quietly.

We can’t always be physically in a peaceful place, but we can try to be there in our minds. Peace within our minds, can lead to greater patience, better health, and more peaceful relationships. Find your peaceful place, even if it’s all in your head.