I’m following the ongoing reports and discussions by Professor Ford against Judge Kavenaugh and frankly, I feel ill. A woman made an accusation of a sexual assault, an assault she reportedly told her husband and therapist about six years ago. Yes, she’s accusing him of something that happened 35 years ago. I don’t care it it was 35 years ago or 35 days ago, if a woman makes such an accusation, nobody’s first, second, or third response should be, with out any real evidence to back up your point, that “she’s lying”, “what’s the big deal”, “boys will be boys,” “you seem fine, let it go,” or “this is going to ruin his life”, which we also heard from defenders and even the judge in the Brock Turner case 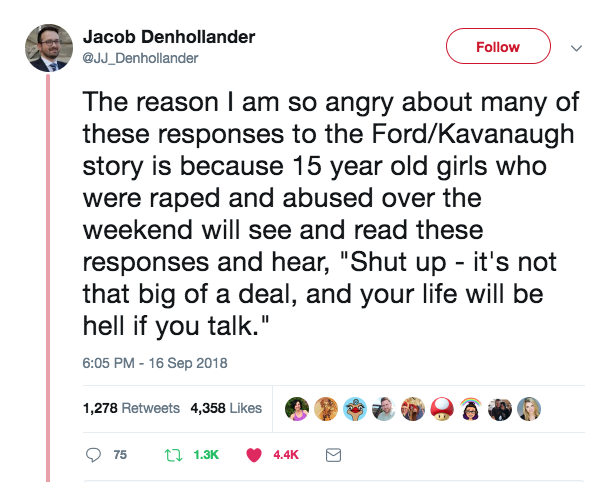 While so many people are talking about this in the political context, such comments are deeply damaging, not only potentially to Professor Ford (who has received not only sickening comments, but also death threats), but as Jacob Denhollander said in his tweet, what message are we sending to the 15-year-old girls (the age Professor Ford was at the time this event apparently took place) who have been assaulted or are experiencing ongoing abuse? They are already being told by their attackers and abusers that they better not say anything. That nobody will believe them. That they’ll be in just as much or even more trouble than the perpetrator if they tell anyone.

It can takes years for a survivor of ongoing sexual abuse or sexual assault to reclaim their life. And even when they think, “hey, I’ve got this. I’m healthy,” there are setbacks, both small stumbles and large crashes that can sneak up on them. 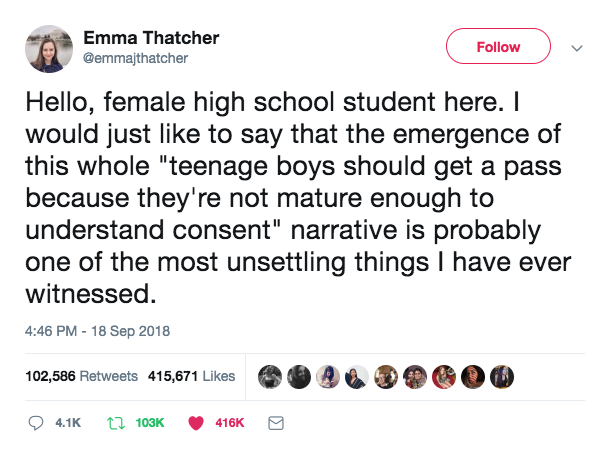 My heart goes out to Professor Ford and every 15-year-old (and younger) girl or boy whether they’re still 15 or 15 living in a 45 year old’s body still trying to recover from what happened to them. The truth is, it never goes away. There will be bad days and good ones. There will be complete assholes, both men and women, who won’t believe you or who will try to diminish or outright dismiss what happened to you, but there will also be those who believe you, support you, champion you on your road to not just surviving, but thriving. Remember those people. They really are out there and they will help get you through.

These days, it takes courage to tell the stories of assault and abuse. It shouldn’t. All survivors should be able to safely tell their stories to help the wounds start to heal. It is up to all of us to do what we can to provide that safety.