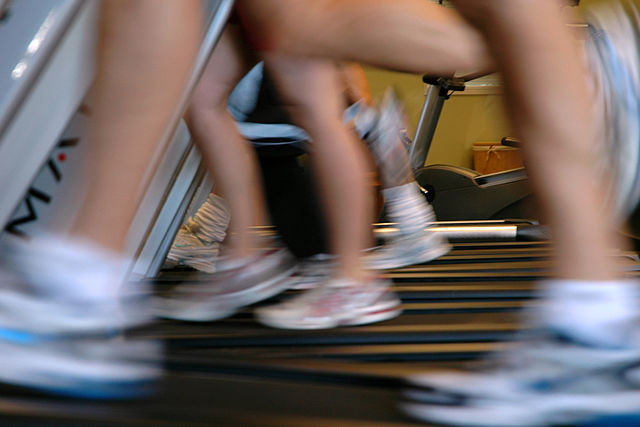 Several years ago I was at the gym and there was a woman on one of the treadmills. She was running fast and had the incline set quite steep. And she was clinging to the front of the treadmill to keep from flying off.

If you’re working so hard at something that you have to hang on for dear life, maybe you’re pushing yourself too hard, or being pushed too hard (I’m thinking of you health care workers, and thank you again for doing what you’re doing).

For those of us doing it to ourselves, however, something has to give. Either you need to slow the pace, lower the incline, or both. If you’re clinging to the front of your treadmill (literally or figuratively) you need to make some changes.

The woman on the treadmill was probably near or at her maximum heart rate zone which is fine for a quick sprint (no more than 2-3 minutes), but not for anything longer, and definitely not for a long distance run such as a 5K. The fact that she was hugging the front console was a clear sign that she was going faster than she could handle.

If you need to work long hours with little rest for a day or two, you can probably handle it, but not for a few weeks or for months or years without it taking a toll on your mind and body. Both need you to rest. Both need you to not work at your maximum for more than a very short period of time. Both need you to slow down or stop if you’re in danger of flying off the back of whatever your treadmill is.

Is this always possible? No. Right now there are a lot of front line workers who are basically tied to treadmills that are going at a high speed up a steep hill with no end in site. The negative effects on their minds and bodies may last the rest of their lives. It shouldn’t be that way.

Those fighting for equality in areas that many people take for granted such as voting or driving in their own car in their own neighbourhood and not being pulled over or chased for “not fitting the profile” are also tied do those out of control treadmills.

In those cases, when they can’t just slow down and lower the incline, they need our help to do so. That gym, otherwise known as functioning societies, requires us to keep the equipment /. systems in proper working order to avoid anyone getting hurt.

Featured image courtesy of Brandon Wiggins under a CC-BY-SA license.