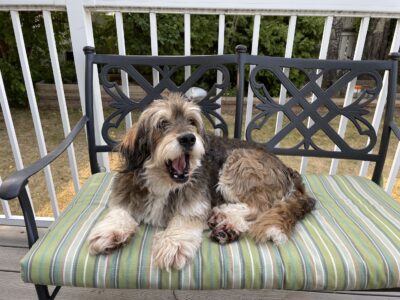 First, I’m sorry for planting an ear worm for all of you Monty Python fans, but the title of this post just came to me.

We have a new dog. We’ve had a beagle / corgi something mix for just over six years and she’s great, but we have the room in our home and in our hearts for another dog so we started watching shelter websites for one that would suit our needs.

Our new guy is a Wheaton Terrier and something smaller mix. We were warned that he annoys other dogs with his forwardness, is very vocal, and may have allergies. The first two must have been his responses to being at the shelter because he rarely barks and is quite submissive to our other dog who hasn’t gotten the message and continues to bully him. We’re working on it.
With us he just wants to cuddle, which is probably one of the things pissing off his sister, but I’m happy to see that he’s been so trusting with us from the start.

He does appear to have some allergies though so our vet is trying him on some medication. She warned us that in the beginning he’s going to probably drink a lot more water and pee a lot more. While he’s house-trained, since starting the medication, we’ve found two puddles in our living room (thankfully we have hardwood, not carpet). The most recent time, he managed to soak our daughter’s brand new backpack that she bought with her own money and was so happy about. I had just returned from the dog park with both dogs when I came home and discovered the evidence.

My wife took our daughter camping this weekend, so I’m not sure yet how our daughter feels about this (she’s madly in love with the new guy). I needed to get the backpack to the laundromat to see what they could do about it, but we’re a one car family and they took the car to go camping.

I cleaned up the floor, put the backpack in a small trash bag, turned on a walking workout out on my watch and an informal walking meditation (pace can be whatever you want it to be) on my phone, and headed out. Round trip turned out to be slightly more than 2 1/2 miles and I completed it (pausing my workout for the couple of minutes to explain the situation to the attendant at the laundromat ) in 40 minutes, which was twelve minutes less than the Google Maps estimate.

I could tell that the dog felt bad and the backpack’s fate is yet to be seen, but it resulted in an unexpected outing, a chance to do a different kind of meditation, and it turned out to be a nice walk to get some more exercise.

Honestly, my first reaction was frustration with his accident, that I was the only one around to deal with it, and that I didn’t have a car to take it to the laundromat, but that was my reality and no amount of frustration was going to change it. It’s not that I said, “Hey, this is great, look at the good that will come out of this,” but I did do what I had to do, I did let go of the frustration, and some good did come out of it.

I don’t want him to keep peeing in the house, and unexpected walks to the laundromat on a regular basis will cut into other things I need or want to get done, but when things like this happen, or other such things arise, I’m going to try to consciously put the breaks on my frustration and see what comes from it.

In the meantime, I think my dogs would like some cuddles.